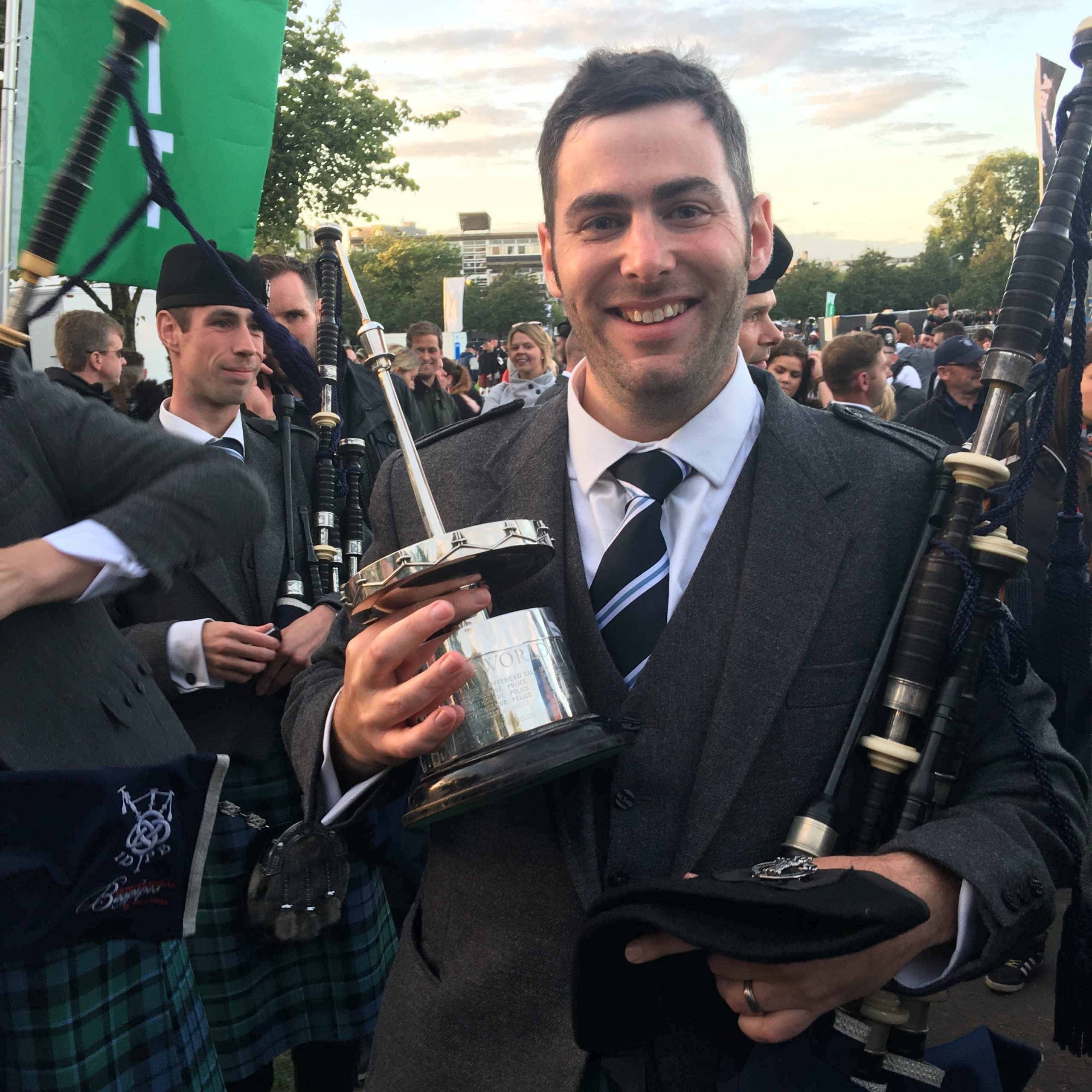 So, let me be the first to say THANK YOU for requesting your free guide with us today. In 10-15 minutes, it will arrive in your email inbox.

While this guide will help you a great deal to achieve great results, don't forget that the big picture we're trying to achieve is to become fully on "auto-pilot" when it comes to bagpipe introductions.

While you wait for your materials to arrive, please have a peek below at our video course "the S.T.A.R. Bagpipe Strike-In Method" a course designed to get you fully up to speed on what mastering the bagpipe introduction is really about. Let's go deeper than just picking up a few tricks. Let's become invincible during the strike-in.

The course is available to you at a (very) special price if you purchase before exiting this page.

Andrew from the Dojo 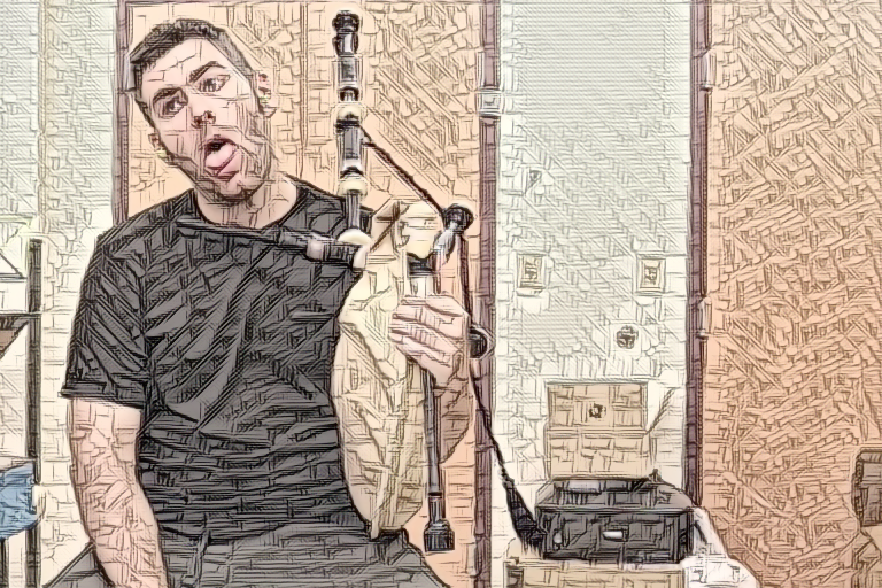 A reliable, repeatable, ultra-"doable" 4-step process that guarantees your bagpipes are comfortable to play every time you pick them up out of the box. 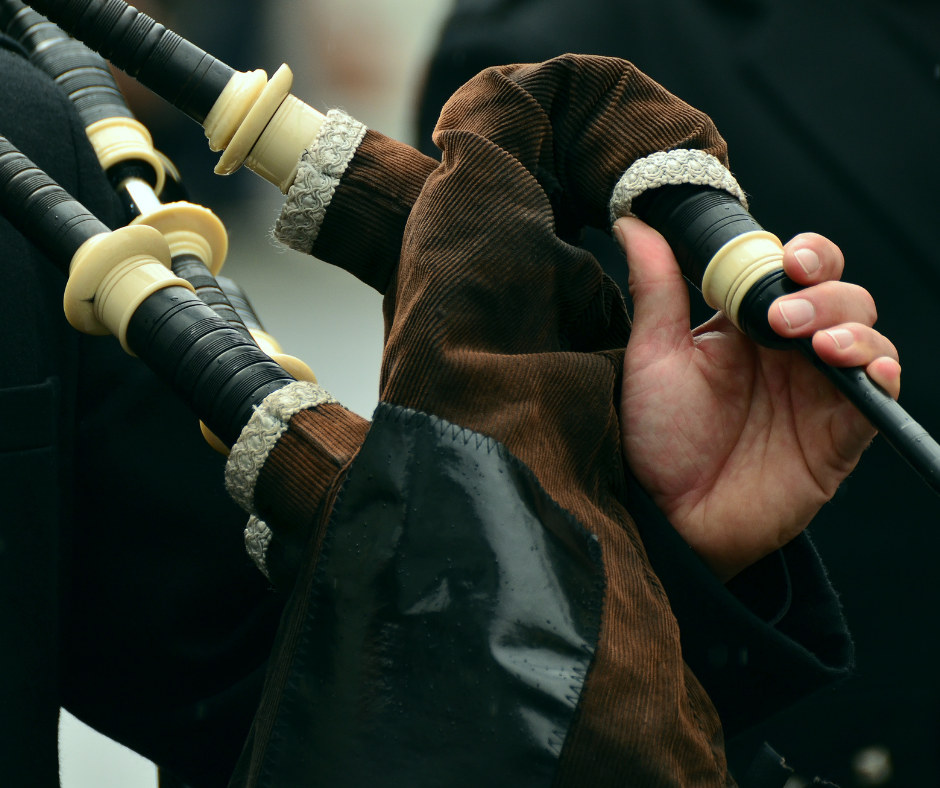 Get perfect strike-ins, every time, with our simple, easily replicable four-step process.

Do you ever let your band down due to strike-in struggles?

This "success plan" is a video-course that teaches you the in-depth skills you need to master the challenging skill of bagpipe strike-ins and be confident you can strike in cleanly, on time, and in tune – every time. 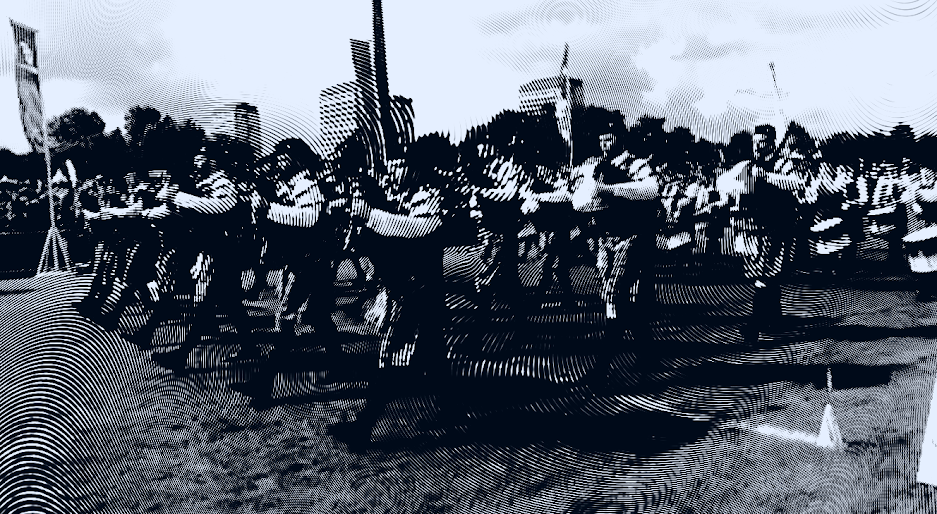 Real-talk: If you can't musically start your pipes 99.9% of the time, you don't belong on the field.

Sorry - the truth sometimes hurts! And, believe me, I know how you feel. I've been "that guy" in a band that's "not getting it" with the strike-ins.

And here's the thing I didn't get – and it's likely you're reading this because you haven't had your "a ha!" moment yet either – strike-ins are not about musically starting your pipes with nothing catastrophic going wrong. I used to think this, but I was so, so wrong too many times.

Strike-ins are REALLY about musically starting your pipes with nothing catastrophic going wrong....

It's not good enough to be able to do it. You have to have a system that never fails you.

Every time you mess up a strike in, you ruin a performance for your band and your band-mates.

When I was younger, I would travel hundreds of miles with my band. Every member of the band would sometimes take time off work to play competitions and gigs. They'd pay money for hotel rooms and restaurants. They'd bring their families.

And then, HONK. Someone in our band would have the dreaded early chanter that crushed any hope of winning the competition.

Or, on other occasions, a bass-drone would double-tone, producing a truly horrifying sound that would me death for our humble (and ill-prepared...) competing band.

What a terrible experience for everyone involved! The performance is ruined before it even begins.

And, it doesn't just stop with competition. How many "street bands" out there are putting a bad taste in the mouths of ordinary listeners, by being unable to start up without sounding like the elephants escaped from the circus?

Sure, accidents happen, but...

I want to make sure I'm being clear here. Bad attacks could happen to anyone. There's always going to be a fluke that no one could have foreseen that causes a bass drone to double tone, or an early chanter to sound, or an 'E' to come in out of tune.

Maybe a speck of dust hits your bass reed at the exact wrong moment. Or maybe you fall into a pot-hole you never saw coming as you're marching down the street.

But the point here is that you, the performer, the team-member who cares deeply about your band – that you've done everything you possibly can to ensure these accidents are truly accidents, and that it wasn't for any lack of preparation that the bad attack happened.

There is a way.

Over the years, I've played under many great pipe majors that have taught me "tricks of the strike-in trade," and I've also been a teacher and a pipe major that had to convey strike-in concepts to my constituents to make sure we were successful.

There is a way to set up your pipes and to practice that will eliminate any risk of a bad attack.

With good technique and practice we can be sure beyond any reasonable doubt that we won't ruin performances for our band. That everyone will start with a well-deserved BANG!

Join us to learn a failproof system for perfect strike-ins – every single time... 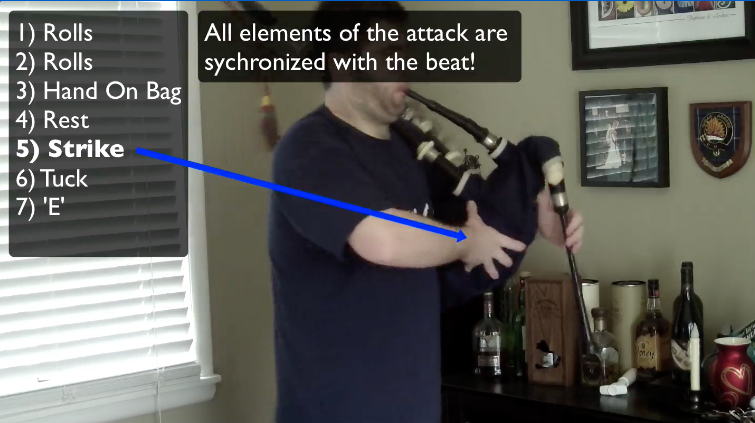 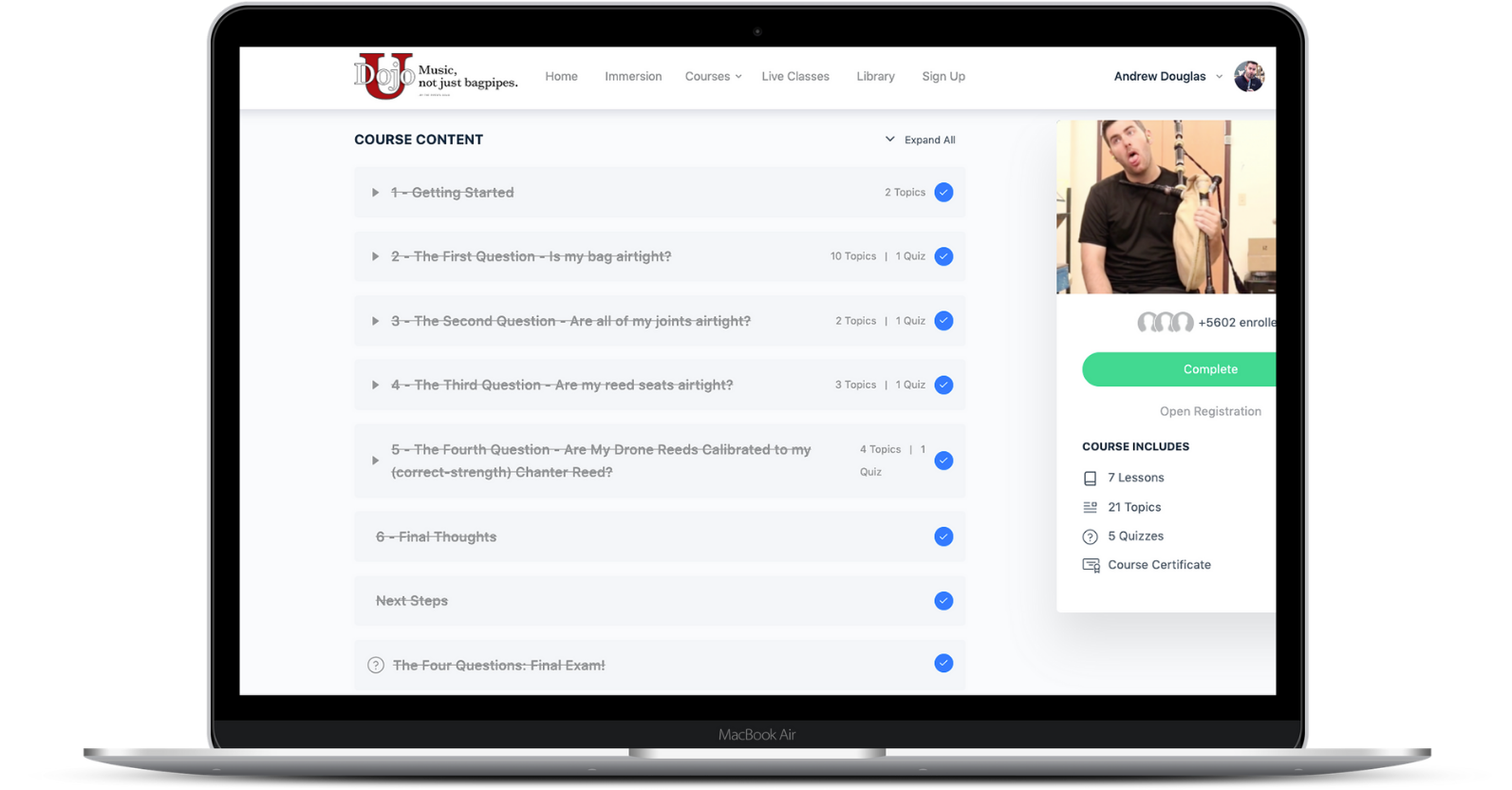 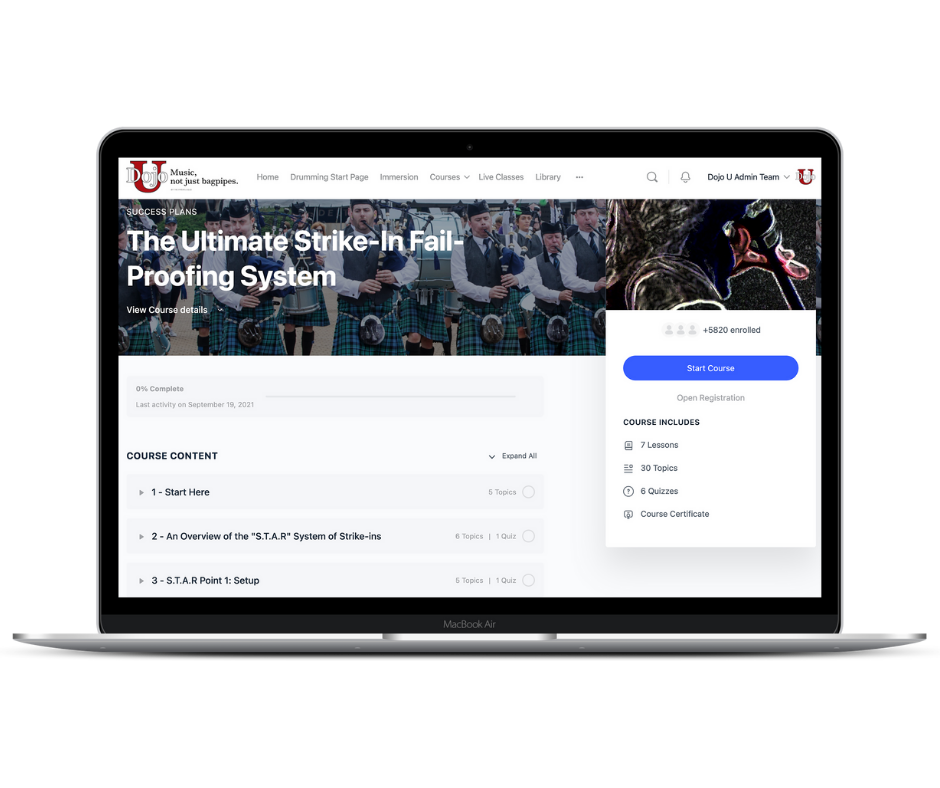 "Good course! Techniques to help with strike-ins are needed by many pipers I know. Thank you!"

What you'll learn with this success plan...

We'll review essentials of bagpipe maintenance, but also show you one very important "trick" that you'll need to know to get rid of that double-toning bass drone forever!

Should you choose to adopt it, this technique will drastically improve your strike-in consistency, and ensure you never have the dreaded "early E" ever again!

We'll explore how to memorize the feel of your bag so you always know how much air pressure you need to make sure that you come in perfectly in tune on every strike-in.

Getting the rhythm down

We'll go through exactly how to connect all strike-in technique we'll have covered to the rhythm of the music, so you're able to time a perfect strike-in, every time.

Enroll today for just $11 (usually $49 – save $38!) and learn the step-by-step process of generating a guaranteed great pipe band attack, every time!